The traditional family of hand percussion instruments is generally defined as an open shell frame drum with large cymbals or jingles. They are similar in appearance and origin to a very large tambourine, but rather than simply being an accompaniment or backing instrument, the Rik family of drums can often take a lead or solo role. The jingles, rattles or rings are often played as a discreet component of the drum, along with a broad range of unique head and rim finger and hand articulations. This broad family of specialized drums is treated as a very serious and deeply nuanced instrument class in both traditional and modern Middle Eastern, Central Asian and Eastern European music. For our Riq Drum multi-sample library, we captured a pair of full-sized drums, one larger 15-inch “daf” drum from Greece with metal rings and bearings (actually called a daf) and one smaller 13” riq drum from Egypt with wide tin “cymbals”. We also captured a toy frame drum that we’ve modified into a miniature riq, by adding egg-shakers. We’ve also included a full collection of atmospheric and ambient sustaining instruments, each created entirely through heavily manipulating the source recordings for this library and equipped with multi-layer morphing, performance shaping and FX chaining options.

The full retail version of Native Instruments Kontakt version 5.1 (or later) is required to use .nki instrument presets included in this library. The free Kontakt "Player" and "Add Library" import process do not support this standard open-format Kontakt library. Windows XP or higher. Mac OSX 10.6 or higher. Dual Core CPU, 2 GB System Ram, SATA or SSD hard drive recommended for this library. This software is delivered as a digital download, so a broadband connection is required. All sales are final. Please see our Help Page for download and installation instructions, tutorials and the End User Licensing Agreement before ordering. 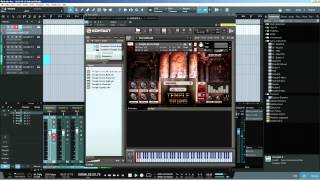