Repro dives into the past for analogue inspiration, meticulously modelling two famous synthesizers. Every detail of the original was captured using component-level modelling technology to create the most authentic model possible.

All the subtle characteristics and quirks found in the originals are present in Repro. One product, one installer, two synths. Repro-1 is a fierce monosynth: The classic design gives you immediate access to all the raw power: Two oscillators, self-oscillating 4-pole lowpass filter, arpeggiator, step sequencer, the unique modulation section, and five stomp-box effects which can be arranged in any order. Hard working, raw sounding and immediately playable, it's a simple and intuitive synthesizer which belies a deep feature set capable of a wide range of sounds.

The plug-in is a component-level model of perhaps the most powerful-sounding monophonic keyboard ever built. In the early 1980s, polyphonic synthesizers were almost within reach of the average musician. To be commercially viable, any new monophonic instrument had to be cheap but very capable. Fat drones, cutting leads, funky basses, quirky sci-fi sound effects – this synthesizer delivered on all counts.

The circuit design made good use of standard Curtis chips and the little onboard sequencer was more than just a welcome extra. Despite its molded plastic panel and the limitations of monophony, it sold surprisingly well and is generally recognized as an iconic piece of synthesizer history. Our plug-in version includes all the lovable quirks of this classic synth, but with a much more capable sequencer, lots of presets, several under-the-hood tweaks, more modulation options, and as a plus: a great collection of cute stomp-box effects.

Apart from being unashamed eye-candy, the Tweaks page is there to let you change the fundamental behaviour of individual modules. There are 5 user-adjustable jumpers (mini circuit connectors) and 5 module tweak selectors. While on this page, all the main controls of the synthesizer are still accessible.

Beside the option to modify the synth's fundamental characteristics through jumpers and selectors, the panel also includes access to the Microtuning section with many included presets.

The sequencer in the original hardware may have been a stroke of genius. Repro-1's version lets you step-record two patterns of up to 32 notes each, which are also saved with the preset and support copy/paste of pattern's presets between different instances of the plug-in.

Other than having more steps than the original, the integrated sequencer supports per-step velocity, a rest button to add pauses, the ability to record your own sequences through a MIDI controller, and other improvements.

Repro-1 ships with a set of 5 high quality effects in the shape of stomp-boxes. From subtle to extreme adjustments, this section expands the analogue synthesizer's capabilities beyond expectations.The effects section includes Jaws (wavefolder), Lyrebird (a flexible delay, which inspired the creation of Colour Copy), RESQ (semi-parametric EQ or resonator), Drench (a lush plate reverb), and Sonic Conditioner (a stereo saturator and transient designer - to add the right amount of gelatine to your patches). All effects are rearrangeable through drag and drop in the FX Chain section. Repro-5 shares a lot of sonic DNA with Repro-1, but adds new flavours and characteristics. First: it's polyphonic! Play rich pads, shape them using the resonant lowpass filter, drive the polyphonic distortion unit as hard as you like, and finally polish your sound with five built-in effects. Keep it lush, or go for thick detuned unison leads. Repro-5 adds new dimensions to the familiar classic sound while keeping analogue authenticity front and centre.

First we released Repro-1, a faithful component-level model of what was perhaps the mostpowerful-sounding monophonic keyboard ever built. It seemed that people liked Repro-1 so much, they wanted more… Would we please consider making it polyphonic?

After umming and ahing about the idea, we decided to give it our best. A few cuts were inevitable (for instance in Repro-1, oscillator B can modulate its own pulse width, which we gladly dropped from Repro-5). We soon realized what was happening to our new baby: It was looking more and more like its true father, a famous 5-voice polyphonic synthesizer from the same company born in 1978. While Repro-1 includes a sequencer, Repro-5 comes with a distortion unit.

Each voice has its own processor, which means there is no interaction between notes in a chord.
The distortion gets applied to the signal before the rest of the included effects.

Formats
Repro is not a standalone product, it requires host software. Repro is compatible with nearly all DAWs. 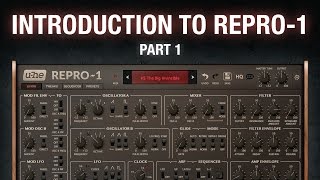 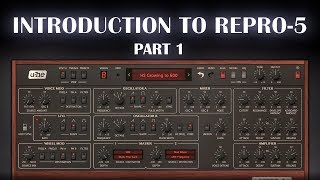