Nepheton contains 17 fully synthesized modules that work together to emulate the original 808 drum machine. All the sounds and detailed nuances of the original are captured perfectly. Nepheton’s modules are equipped with additional controls for deep tone and envelope tweakability. Listen to the audio examples or just download the demo and start beatmaking today!

Take advantage of Nepheton’s flexible output configurations - every module’s audio signal can be routed to any of the 12 outputs. This means you can route each source to a separate aux and sculpt its sound with your favorite plugins!

Each individual output can be set to mono or stereo. For the real 808 fans, we've also included the original Trigger output (fully configurable, of course).

Nepheton has extensive midi control. It can be used to trigger individual modules as a modern alternative to the internal sequencer. This can be set to play using Nepheton's internal clock, or set to sync to the host sequencer.

Most of Nepheton's parameters can be automated within the host and can be controlled via MidiCC using virtually any external controller. An easy-to-use “Midi Learn” function allows instant parameter reassignment.

The internal sequencer contains two banks of patterns: simple and extended. There is 16 extended and 96 simple patterns which both can be edited traditionally using the step buttons or using the tap function.

Simple patterns are used in Host Mode where each pattern location has a midi note number assigned to it. By drawing in notes in your DAW, you can map out and trigger full drum patterns.

Extended Patterns* differ in that they have 4 segments (variations A & B and parts 1 & 2). The whole bank of 16 extended patterns is divided into two groups of Basic Patterns and Intro/Fill In Patterns. You can choose from played patterns, use variations, and fill in modes (triggered automatically or manually). You can also precede the starting pattern with an intro pattern, and much more.

For that creative boost, we’ve added a Randomizer. It can be used to make simple changes to a pattern or to create whole new ones - ideal when you’ve been stuck on that bridge instrumental for too long! Randomizing can be applied to drums independently and with variable frequency - its odds of recurrence.

Twist your knob: The shuffle knob goes waaay past triplets. Set the balance between order and janky chaos: add subtle rhythmic hiccups or throw your beat into a blender. We’re not here to judge.

Sharing is Easy: All external files are stored in the XML format. This allows single patterns or whole banks to be exchanged between users easily. XML allows the files to be edited in a text editor. Ideal if you want to post or share your pattern online - just post the text!

* Extended patterns are used when Host Mode is off. 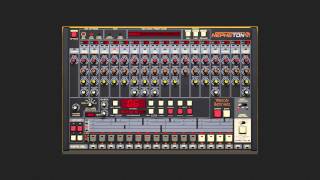 Auto-Tune Pro is the latest version of Auto-Tune, the industry-standard in pitch correction. Auto-Tune Pro provides both Automatic and Graphical editing modes. Maximus is much more than a Mastering Maximizer its also a Compressor/Limiter Noise Gate Expander Ducker and De-esser. Maximus indeed! Will run as a VSTi effect in any VSTi Host (FL Studio Cubase Sonar ...). A powerful virtual analog polyphonic synthesizer that recreates the characteristic sound of an analog synthesizer providing a minimal but powerful set of parameters, for limited but incredible sonic capabilities. Morphine is a powerful Additive Synthesizer with a logical flexible architecture that allows you to create any sound. You will get the FL Studio plugin version for PC the VSTi & standalone version for both PC & Mac OSX and the AudioUnits version for Mac OSX.