miniVerb is an 8-bit/chiptune and lofi reverb effect inspired by the sound of 80s game consoles and retrocomputers.

Early consoles didn’t have much power for DSP effects, so the video game composers at that time had to improvise. The most common way to add a sense of space/reverb to the sound was to sacrifice one of the internal tracks to play a delayed version of the original sound, essentially using a slapback echo to add depth.

miniVerb recreates that classic digital echo/reverb sound, made famous by iconic consoles such as the NES and SNES, topping it with two filters (post/pre), vibrato, and crusher (bit crusher, downsampler, pitch shifter).

The Echo Section can be used to simulate the tricks used in early video game consoles to add a sense of space/reverb to the sounds.

The most common way was to sacrifice one of the internal tracks of the sound chip to play a delayed version of the original track, essentially creating a slapback echo effect.

To achieve this NES-like reverb sound, you can use a single delay line, very short time, no feedback, and width set to mono.

To simulate a 90s fake reverb/echo (like the SNES) instead, you can play with longer times and add some feedback to simulate a reverb tail.

For a more modern approach, you can switch the Echo to Double Delay Line by clicking on the blue button (in the top-left corner) and increasing the width to a wider setting. 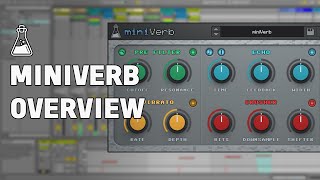