Reels is a tape emulation plugin with built-in echo section and tape start and tape stop effect. Based on an old Japanese portable tape recorder with a very distinct Lo-Fi analog sound, Reels emulates all the imperfections of consumer reel-to-reel recorders.

We have modeled three different 1/4” tape frequency responses and saturations, along with all the analog imperfections of tape recording / playback.

Reels will add a very rough retro analog sound to your mixes. If you are looking for a Hi-Fi mastering tape emulation, this is not the plugin for you!

Reels is based on a vintage Japanese reel to reel, ironically marked as High Fidelity, found in a distressed state at a local flea market. Most of these consumer tape recorders, also due to their age, produce a very rough Lo-Fi analog sound.

During recording or playback, the motor noise somehow bleeds in, along with the usual tape hiss, limiting the actual bandwidth available on the tape.

Reels recreates all the imperfection of consumer reel-to-reel vintage recorders, including:

When you press stop on a reel-to-reel player, the tape doesn’t stop immediately.
Instead, it gradually slows down creating a pitch down and fade out effect.

The same thing happens in reverse, if you hit play, the tape gradually speeds up creating a pitch up and fade in effect.

You can replicate this effect with Reels, and you can also change the speed of the start/stop effect. 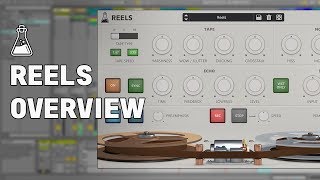