Slate Verbsuite Classics - 8 of the most popular digital reverbs

Reverb is perhaps the most fundamental effect in audio production. Over the past several decades, many classic digital reverb units have become staples for professional mixing engineers. VerbSuite Classics contains all pro legendary reverb`s in one plug in.

VerbSuite Classics is a partnership with LiquidSonics, and uses proprietary FUSION IR processing to capture the evolving and modulating characteristics of the modeled hardware reverb tone. In blind comparisons, users could not differentiate between the real hardware reverb patch and the VerbSuite capture.

FG-480This is a model of what many consider to be the industry’s most standard reverb, and one that is still popular amongst top pros even today. This reverb has several programs that share a distinct and classic sound due to the unit’s unique modulation characteristics, which help it cut through the mix.FG-2016First created in 1982, this American-made reverb was known for its realistic recreation of natural-sounding rooms. It’s been a favorite of top engineers since its creation, and has been heard on countless hit records.FG-250This is a model of the first ever digital reverb, built in Germany. It’s widely known as one of the best-sounding reverbs even to this day, despite having only 16k of memory! It has a thick tone that mixes into source material with ease.FG-QRSWhen we asked several top pros which reverb they insisted we include in VerbSuite Classics, this German-made unit from the early eighties made every list! It’s incredibly transparent for a digital verb, and is known for having minimal digital artifacts. We love it on vocals but it’s great on so many other sources as well.FG-2000This extremely rare Japanese-made reverb has been the favorite drum verb for many top pros. They have had mechanical issues and are very hard to find, so we were lucky to capture a unit in perfect condition. Not only amazing on drums, but fantastic on guitars, piano, and vocals!FG-16XThis is a model of the famous microprocessor-controlled digital reverb from the early 80’s. It has a smooth and lush tone that is incredible on all types of source material, and one of its most famous uses is the drum sound on “In The Air Tonight” by Phil Collins.FG-6000This is a model of a modern Danish digital reverb powerhouse! This reverb has several programs that are incredibly realistic, smooth, and deep. Amazing for small and large spaces alike, you’ll find an enormous amount of use for this incredible reverb!FG-BM7The BM7 reverb model is a free expansion for VerbSuite Classics. It’s available directly from LiquidSonics using public-domain Bricasti M7 Fusion-IRs, which capture what many say is the best-sounding digital reverb in the history of audio production. Unlike several static impulse response packs taken from this famous unit, the VerbSuite Classics Fusion-IR expansion pack recreates the true tone and character of the unit’s modulation. 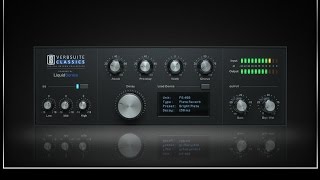