Instant atmosphere with beat presets and samples from the queen of alt-pop electronica. Crispy tight drum patterns, booming bass, ethereal processed vocal lines and a whole lot of space. Blast off on your musical journey using Delhia's Oscillations as a launchpad for your beats.

It's a mirage. This is music so rich in texture and feels that you can almost see it. From moody club house bangers to dreamy downbeat soundscapes layered with siren singing, this XOpak takes you deep into Delhia's sonic world as she paints a succession of intriguing aural images. Mesmerizing and beautiful.

At times deep, urgent and driving, at times wistful and floaty, there's a lot to explore here. Each preset feels almost fully formed, a solid starting point for further experimentation. Simply load a groove up into the inbuilt sequencer and let your imagination go wild, swapping out sounds for anything else in your XO library to make endless creative variations. Build, layer, experiment, play. Delhia de France is a multi-talented singer, songwriter, producer, and visual artist in the field of electronic music. Delhia's long list of collaborators includes artists like Adriatique, Anyma (Tale of Us), Monkey Safari, and notably Robot Koch. You also might have heard her songs in soundtracks for Marvel and Netflix.

She is very much an artist as well as a musician. Her solo work sees her donning elaborate otherworldly fashion and creating water-inspired worlds that manage to be both sonically cinematic and visually stunning. 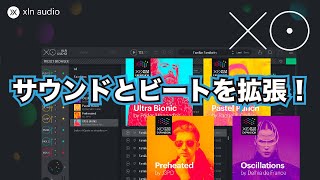